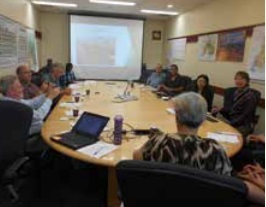 As a result of the connection built up through the “International symposium on Community-based Management of Forest Resources” held in March, 2015, jointly hosted by the “The ILEK (Integrated Local Environmental Knowledge) Project” of the Research Institutes for humanity and nature, the University of Saskatchewan (Canada), and the Kyoto Model Forest Association, we were invited by the University of Saskatchewan to join a survey of the Prince Albert Model Forest in Canada. One of our staffs visited the site in early July, 2015.

The province of Saskatchewan, where the Prince Albert model forest is located, is 1.7 times wider than Japan in its land area, with a population of 1.13 million, and its northern part is occupied by the forests. Most of the forests are owned by the provincial government, but some part have been traditionally used and managed by the indigenous people. Model forest was established upon the consultations with these parties involved in the aim of promoting sustainable forest management.

Active operations carried out in the Prince Albert Model Forest so far include surveys on the number of wildlife conducted in cooperation with universities and local residents organizations, international exchange programs in which young people exchange the fruits of their interviews with their elders on the changes in forests and lives, and training programs for forest workers and so on. KMFA introduced the activities and initiatives at the Board meeting, and discussed similarities and differences of the model forests between the Prince Albert and Kyoto, and the potential for a future cooperation. We will continue to exchange informations in an effort to strengthen the linkage.